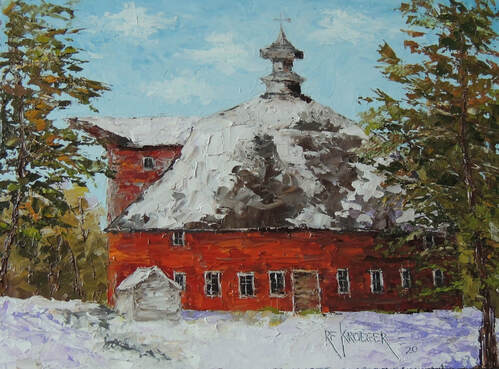 Cuba of the North”

Located in Cuba Township, population 208 in a recent census, this round barn symbolized the hardy farmers in this snowbound state. Founded in 1872, the township took its name – not from the island south of Miami Beach, famous for President Kennedy’s famous missile crisis of 1962 – but rather from Cuba, New York, the former hometown of the township’s first settler Charles W. Smith. Temperatures in Havana are much different from those in Becker County.
Surrounded by lakes (Minnesota isn’t called the Land of a Thousand Lakes for nothing), the township’s 35 square miles is almost four percent water: Cuba Lake, Duck Lake, La Belle Lake, Lime Lake, and Stinking Lake. Though the last one doesn’t sound inviting, the others have strong appeal. The closest city is Lake Park, whose motto is “Gateway to the Lakes,” a phrase that is more than appropriate. CLICK HERE FOR THE REST OF THE STORY 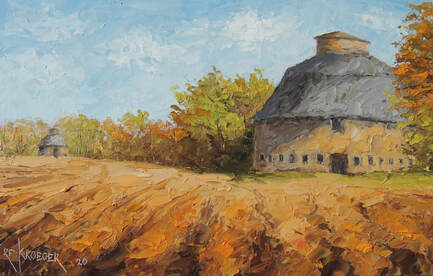 Before the first European settlers came, the land of present-day Benton County was home to the Sioux and Chippewa bands. Wild game and buffaloes were plentiful. Though skirmishes made pioneering risky, David Gilman established a trading post on land along the Mississippi River in 1848. Immigrants from Scandinavian countries, Germany, and Poland began arriving and by 1880 much of the land had been claimed by farmers. And, by the turn of the century, there were enough farmers to warrant a veterinarian.
One such animal doctor was Alphonse Cota, who also farmed. However, Al had a flair for being innovative and gave up his veterinarian practice in 1913 to pursue his real passion – construction. His theory was that a building made of concrete, though initially more expensive than wood, would pay dividends in the long run. He became a concrete contractor.
This fascinating essay will be posted eventually. 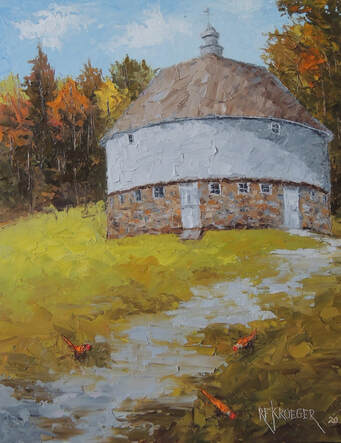 Sorry, but the county’s name, Goodhue, conjures up pleasant childhood memories. In 1950 a movie was made, The Good Humor Man, and in 2005 a Showtime channel movie of the same name was released. Both refer to the white-clad salesmen, who drove through neighborhoods in trucks, blaring their jingles – much like the Pied Piper playing his flute – to attract children to buy ice cream. In the early 1920s this iconic ice cream, the Good Humor-Breyers brand, began in my hometown of Youngstown, Ohio. When we kids heard the music, we’d ask mom permission and then run like crazy – with a dime or a quarter – to buy the delicious chocolate-coated ice cream bar on a stick. In the 1950s the company had nearly 2,000 Good Humor trucks around the country. Who doesn’t like ice cream?
This fascinating essay will be posted eventually. 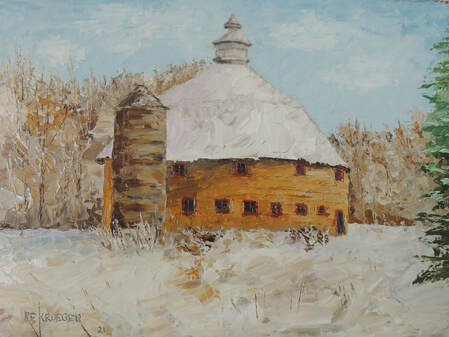 I took this composition from a photo by Henry Hintermeister, a Minnesota photographer, who posted it on Facebook in March, 2021. The warm beige colors of the concrete stone walls contrasted nicely with the black windows outlined in red. I thought the painting, even though not of an Ohio barn, would add to the fundraiser in the historic Pump House event in August in Chillicothe, Ohio’s first capital.
The barn merited a listing in the National Register in 1980, when it was listed as in “good” condition. However, Henry’s photo shows the cupola ready to fall off and the cap of the silo gone. A photo taken in 2002 showed an intact cupola as well as a distinctive and elaborate cap on the silo. While the concrete walls will stand the test of time, water penetrating from the broken cupola will eventually lead to collapse of the roof and the wood stave silo, missing its top, won’t last much longer.
At the time of the National Register listing the barn owners were Allen and Edward Linden, descendants of Olof Linden, who left Sweden, came to America’s northern region, and began farming here in 1874, a time when there were still conflicts with Native American tribes. By the turn of the century, the Linden family had prospered enough to warrant a new barn, which was built by local carpenters John, Victor, and Alec Wicklund in 1914. Linden had probably observed round barn plans not only in agricultural journals but also already existing in nearby counties. It must have seemed to be the ideal solution to expanding his dairy herd.
And, rather than wood siding, he used 10-inch concrete blocks for the walls, 18 feet high, with visions of future generations of Lindens continuing the family farm. Inside he covered the walls with clay tile, a popular choice of Iowa’s round barn builders – one which improved sanitation, and which would last longer than wooden siding. Dozens of square windows, now framed smartly in bright red, provided light on both the first and second floors, a necessary component, particularly during long northern winters.
On the ground level there were six horse stalls and a harness room next to the large cattle area of 20 stanchions, a calf pen with six stanchions, and a cream separator. A stairway led to a huge hay storage area, from which hay could be tossed down to the ground floor. However, the Lindens chose not to follow Professor King’s design of a central silo, instead building an outside silo of redwood, topping it with an attractive gambrel hexagonal cap, matching the conical gambrel roof of the barn. It was a large, stylish barn, a popular landmark in the area in 1914.   However, at the time of the National Register application in 1979, the barn was not being used for dairy farming – no cows – though a neighboring farmer stored hay in it. John Roscoe, in his 2019 book, Minnesota’s Round Barns, reported that, during his visit, Jerome Jirovec, the current owner, said that, after the seamed metal sheets covering the roof had come loose, allowing water to penetrate, he removed every nail over a period of two years – probably several hundred – and replaced them with longer lasting screws. He wanted the rafters, made of durable Washington State fir, to continue their job of supporting the roof. Talk about a labor of love. And, with good fortune, the Linden barn will continue to survive, a tribute to a forward-thinking Swedish immigrant, one who spared no expense in constructing this round barn and its wooden silo, wonderful remnants of the past, even in snowy Minnesota springtimes. 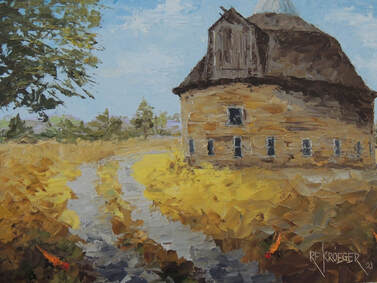 Just as “Granville Gray,” an old deteriorating barn in Licking County, stimulated my Ohio Barn Project when I first laid eyes on it in 2012, likewise this barn inspired John Roscoe to research and write about round barns in his state, now recorded in his book, Minnesota’s Round Barns. It’s located in central Minnesota in Sartell, a city unusual in that it straddles both sides of the Mississippi River.
The barn’s story began when Peter Fasen built it in 1928, a feat recorded in a granite plaque embedded in the barn’s cement wall. Peter apparently was a farmer of vision and wanted a barn that would endure the rigors of northern winters and the heat of summers, weather factors that take their toll on wood, especially barn siding placed horizontally on a round barn. So Peter chose cement.
Though the barn has been abandoned, its cement walls have endured the weather for nearly a century – as have two similar concrete round barns in nearby Benton County. These two barns, built in the early 1920s, may have been the motivation for Peter’s choice of a round cement barn. All three have gambrel roofs and interior cement silos. At one time, stalls for dairy cows encircled the silos. Dairy farming played a major role in agriculture in Wisconsin and Minnesota, though the Great Depression, beginning only a year after Peter built this barn, created hardships for many farmers.
Fifty years later – in 1978 – brothers Michael and Wilfred Weyer purchased the farm and continued using the barn to raise beef cattle, keeping hay in the loft and silage in the silo. However, they gave up farming in 1993 and stopped using the barn. Though at one time the barn was surrounded by farm fields, suburban sprawl was slowly creeping in.
In 2006 the Minnesota Preservation Alliance placed the barn on its “Ten Most Endangered Sites List.” Around 2009, the year that Mr. Roscoe saw this barn, local citizens made plans to save it and repurpose it into a historical center. However, publicity surrounding this effort failed to attract attention and no one offered to buy the barn from the Weyers. These days, homes and businesses continue to surround the barn and, even though it may eventually be demolished, it served a useful purpose in giving birth to a book on historic barns. For John Roscoe, it was the beginning. 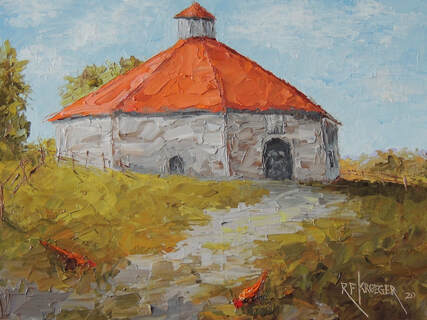 Stone barns are rare and stone circular barns such as the Shaker barn in Massachusetts and the Nutwood barn in Ohio are even more unique. But, even more remarkable are the octagonal stone barns, such as this one and another in Clark County, Ohio. Unlike their wooden compatriots, stone barns, if maintained, can resist natural disasters such as wind, snow, and fire (excluding the roof). They’re the rocks of Gibraltar.
This fascinating essay will be posted eventually.