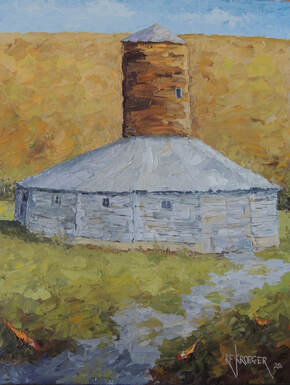 If the definition of aristocracy – including words as rank, the elite, superior, nobility – would apply to barns, then this one would qualify, hands down. Its striking tiled central silo extends well above the low pitched roof, which gives it a spectacular appearance, especially when silhouetted against a wide field of golden corn. Built in 1906 by owner August Nus near the little village of Arlington, Fayette County, the 12-sided barn may have influenced other Iowa farmers to build similar prairie styled barns since it was the first of this type in Iowa.
This fascinating essay will be posted eventually. 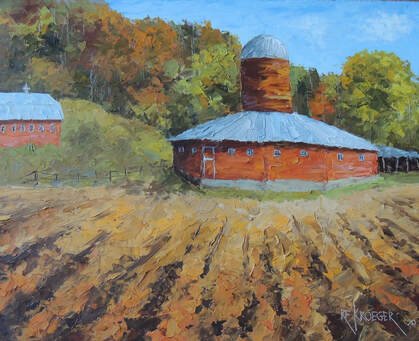 Hexagonal barns built in 1921 weren’t plentiful, especially in Iowa, a state where the circular shape became the most popular round barn type after the turn of the century. And, since most polygonal barns had eight sides or more, this hexagonal stood out once again.
One of only four such barns with a flattish roof and central projecting silo in the state, this is the only round barn remaining in Jackson County. The county took its name from President Andrew Jackson in 1837, his final year of the presidency. Nine years later Iowa gained statehood.
This fascinating essay will be posted eventually. 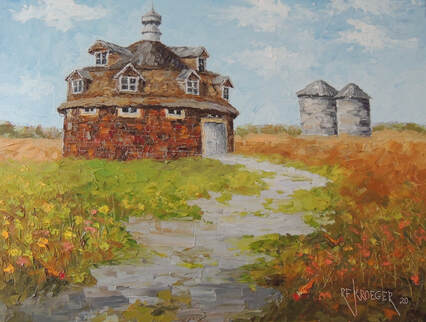 Long after Brigham Young and his wagon trains crossed through Van Buren County in 1846, a farmer in Cantril started raising hogs. And he was good at it – so good that his reputation as a breeder and salesman had spread, convincing him to build a barn to conduct his auctions, which he did in 1918.
This fascinating essay will be posted eventually.