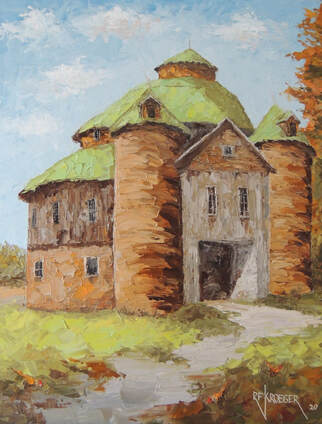 It’s fortunate that this monumental round barn became listed on the National Register in 1985, thanks to a nomination by then-current owner Dale Wohlschlegel, because, by the time of this writing, it may no longer be standing. Architecturally, it ranks as one of the most elaborate round barns in America.
The family patriarch, Zachariah Caleb Thompson, born in Iowa in 1860, and his son C.R. Thompson drew up plans for this barn, after probably reading about round barns in agricultural journals. In 1910 they poured concrete on site – forming the concrete block walls and foundation – but ignored Professor King’s concept of a central silo, instead placing two towering silos on the outside, flanking the entrance and, with pointed conical turrets, made the structure seem more like a European medieval castle than a Kansas barn. In 1912 a team of 15 carpenters – using cottonwood from the area for the joists and walls – began building it, under direction of the contractor, Bill Russell of nearby Anthony. The year-long project ended in 1913, costing $16,000, a huge sum in those days. The affluent farmers apparently wanted to build a masterpiece. They succeeded. They used the barn for dairy, hay storage, and possibly other crops or livestock, as well.
A large barn, with a diameter of 80 feet, silos 70 feet high, and a three-tiered domed roof rising to 75 feet, it had to be the talk of the county, if not the state. A similar castle-shaped barn in Allen County, Ohio, though built earlier, reflected the affluence of its owner as this one did. And, despite hard times for farmers in the 1920s and the Depression years of the 1930s, the farm and barn remained in the Thompson family.
A year before Zachariah died in 1943, the farm was sold, eventually passing to Dale Wohlschlegel in 1981, who thought enough of it to list it on the register four years later. However, without much maintenance, it slowly began to deteriorate, closing another page in round barn history. A pretty good page, at that. Regardless, the barn’s magnificence will endure, at least in this painting, its essay, and in its title, “A Cornfield Castle.” 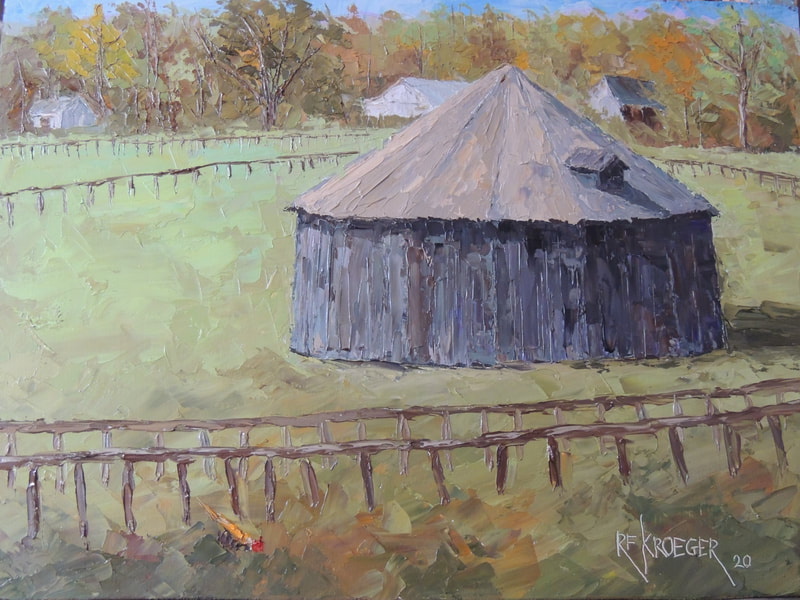 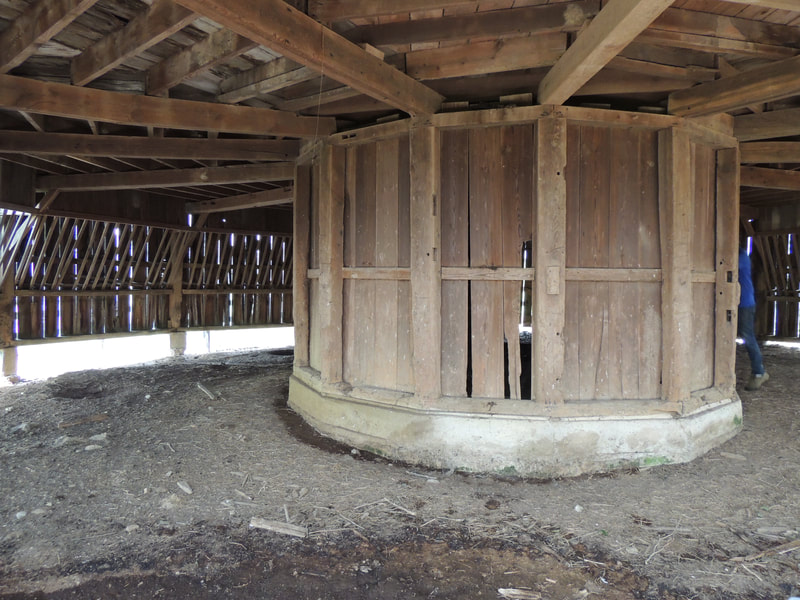 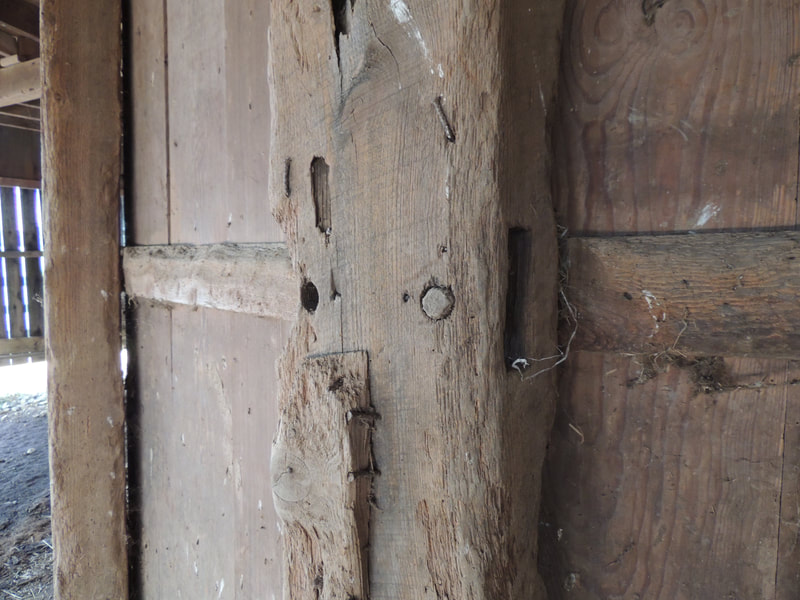 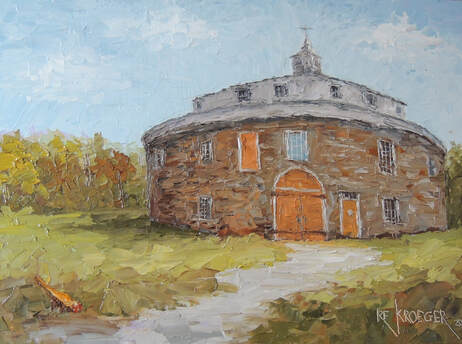 Although my project focuses on round barns built before 1930, occasionally one, built in contemporary times, merits inclusion – such as this one, a replica of the early Massachusetts Shaker barn. Located in Sandwich, a village on Cape Cod named after the historic tenth-century town in Kent, England, the barn serves as a museum to display the incredible antique car collection of Josiah K. Lilly, III, a descendant of the pharmaceutical giant Eli Lilly family. Though the museum opened in 1969, the story goes back much further.
This fascinating essay will be posted eventually. 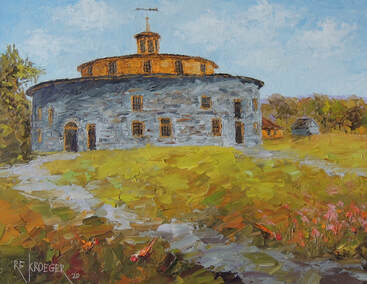 “Hands to Work … Hearts to God”

This slogan identifies the builders of this round barn, the Shakers, and it summarizes their philosophy, similar to that of the Trappist monks – ora et labora. The Shakers, called this name – perhaps irreverently – because they incorporated animated whirling and swirling dancing, trembling, and fainting into their religious services, originated in England and came to America in 1774. Led by a woman, Mother Ann Lee, who suffered the loss of her four children and left an unhappy marriage in Manchester, the group of eight founded a colony in Watervliet, New York, in 1776. Their pacifist religion upheld equality of gender and race and it stressed the importance of confession of sin, communal life, and celibacy, which meant that any children would have to come from outside the group. Converts had to give all their worldly goods to the commune, where they were shared by all. Despite these stringent rules, the Shakers grew.This fascinating essay will be posted eventually. 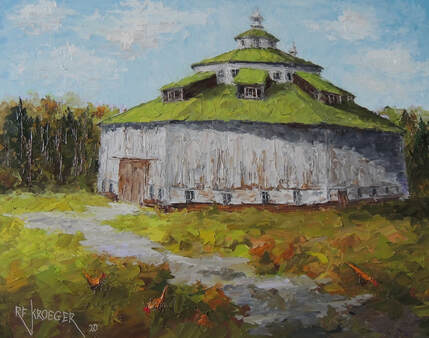 The History of Tom Thumb, published in 1621, was the first fairy tale printed in English. In this folk story, passed down from generation to generation long before it got into print, little Tom is no bigger than his father's thumb. As the tale goes, the wife of a poor woodsman, forlorn for not having had any children, wishes she could have one even if the child were no bigger than her husband’s thumb. When a good fairy, passing by the house, hears her wish, she grants it. Voila, Tom Thumb.
Though there are plenty of Toms on Michigan’s Thumb, the peninsula jutting into Lake Huron –  which, from an aerial perspective – resembles the thumb of a hand or mitten, there’s also an octagonal barn, loved enough by locals to merit preservation. It’s located just east of Gagetown, a village of nearly 400, which sprang up around a mill founded by Joseph Gage in 1869. In the same year, James Luther Purdy, the one who decided to build this barn, was born. CLICK HERE FOR THE REST OF THE STORY